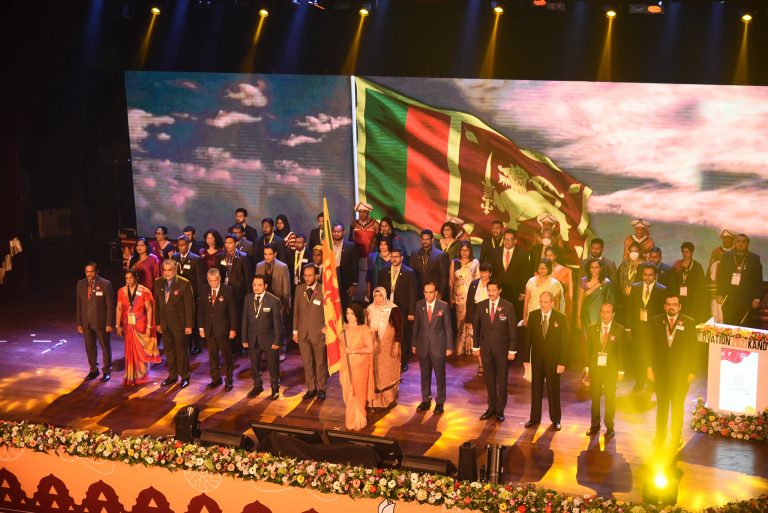 After a challenging term due to the pandemic, District 82 of Toastmasters International held its annual district conference, Ovation, on the 7th and 8th of January 2022. This gala event recognized the achievements of members, clubs, areas, divisions, and the district. The celebration was a grand and mesmerizing occasion for every Toastmaster in attendance.

The event was hosted in the hill capital of Sri Lanka, Kandy, at the Mahinda Rajapaksa Theatre, Polgolla, as a homage to the heart of the Sri Lankan nation and an opportunity for clubs from every corner of Sri Lanka to be part of this momentous occasion.

The conference witnessed an array of interesting educational workshops presented by Toastmasters and industry leaders from across the country; keeping the crowd motivated and inspired throughout. Mohammed Abdullah Qahtani, World Champion of Public Speaking – 2015, graced the occasion and delivered the Keynote Address. His words on the title “Do I Quit?” were indeed so powerful that the applause went far and beyond right after. Not to forget the wonderful entertainment items held from time to time depicting the ancient cultural heritage of Sri Lanka ranging from masks and drums of Sri Lanka to different traditional dancing styles.

The Hall of Fame Awards Ceremony was the glamorous highlight of day two where the dazzling stars of the District were recognized for the years 2020 – 2021. The crowd cheered throughout when the District International Speech Contest Champion and Semi-finalist at the World Championship, Toastmaster Dilan Joseph, from Amana Bank Toastmasters club, got on to the stage. It was indeed a remarkable and proud moment for District 82. Thereafter the Humorous Speech Contest Champion for District 82, Toastmaster Ravindu Amendra, from Panadura Toastmasters Club, was presented the award for his win, followed by the runners-up. Of the ten clubs recognized as the Best Clubs of District 82, Hill Capital Toastmasters Club was ranked first for its utmost dedication and contribution to the Toastmasters fraternity. The members were celebrated on stage, while their moment was memorialized through photographs.

In spite of the pandemic, the year 2020 – 2021 concluded on a high note with District 82 (Sri Lanka) becoming one of 7 districts to become Smedley Distinguished, a title offered in recognition of the district’s growth and educational achievements. An achievement that was largely possible thanks to the leadership of the District Officers and Club Leaders, under the able guidance of the District Director, DTM Noorul Munawwara, DTM; Program Quality Director Srianthie Salgado, DTM and Club Growth Director Nisal Weerakoon, DTM.

With each passing year, the Toastmasters fraternity in Sri Lanka keeps flourishing with a vibrance of its own. Ovation 2021, organized amidst one of the most challenging times the world has witnessed in recent history, was a testament to the resilience and unwavering determination of the men and women who put their heart and soul into making it a reality. While congratulating the Organizing Committee of Ovation 2021 for a job well done, we at District 82 eagerly look forward to what the new year will bring.