Local extreme metal quartet Stigmata have been performing around the world, organizing ground-breaking shows locally, releasing new music consistently and launching amazing merchandise for the past 22 years without any signs of slowing down.

Even when the pandemic hit and crippled the performance arts industry as it did every other vocation, trade and field, Stigmata continued to record and release top notch music supported with music videos.

Consider how in 2022 during Sri Lanka’s greatest economic tumble and collapse, with multiple shortages, staggering rise in inflation, increased cost of living and most live entertainment crippled, Stigmata have worked tirelessly to renew and rebuild the Sri Lankan live music sphere by organizing and staging events throughout this year.

The band and its team realised how important it is to keep the economy of the music industry afloat as many livelihoods are dependant on concerts and shows. Stigmata have thus far staged three successful events ‘Unchained Melody’ in March, ‘Arise’ in June – both at the Gloriance Ballroom in Bellanwilla, and ‘Deliver Us From Evil’ the recently concluded mega event at Tap House by R ‘n R in August which saw audiences filling up the establishment and enjoying themselves throughout the night.

Powered and partnered with an amazing group of Event Partners – Stigmata offers total value to concert goers, to the venue and all the performers who share the stage with the quartet.

‘Deliver Us From Evil’ kickstarted at 8.15pm although audiences flooded in from 6.30pm onwards and got settled in the atmospheric venue. Situated at the Dutch Hospital commercial and shopping site, the audience loved the massive energy and electric vibe of Tap House along with all the bells and whistles the concert promised to be.

The magnificent lighting set the tone for the event, the brilliantly crisp sound with bombastic clarity, combined with the amphitheatrical spatial structure of the venue complimented all the genres and performers that owned the night.

The evening kickstarted with a brooding operatic solo performance by the classical baritone Sanjeev Niles who has been making waves as one of the most original forces in the island. From his soul rending original compositions like the haunting Let There Be Darkness to the melancholic lament of All Earth Shall Cry, to his moving renditions of Simon and Garfunkel’s The Sound of Silence, Metallica’s Nothing Else Matters and the heart melting Nevermore classic The Heart Collector. Sanjeev set the mood and the tone like a dizzying perfect calm before the storm that was to be unleashed.

Next up was the Groove Metal ensemble Trishira, a powerful, tight outfit that smashed like a sonic tidal wave pulsating through the crowds. A band that sports impressive musicianship, neck break rhythms, pounding drums and percussive bass and sweeping guitarwork all completed by a crushing vocal assault. Trishira ripped through their blistering originals Second Chances, Sleep, Daaasi, the ferocious God Automated and the crushing To the Slaughter, A Lamb, while driving the crowds nuts with their covers of the mighty Pantera’s Cemetary Gates and Lamb of God’s Laid to Rest.

The atmospheric venue was now abuzz with near manic crowds, and they had just what the doctor ordered when the booze-soaked Blues ‘n Rock dukes Wagon Park rolled onto the stage after a two-year hiatus and mesmerized everyone with their energy and crowd pleaser tunes Hit the Floor, Invisible Man and Sex on the Highway. They had people on their feet; dancing, jumping up and down and swaying to the band’s catchy, hard rock tunes. Wagon Park rained sweet rock ‘n roll down on the crowd with a masterful performance with more originals like Mr. Minister, the anthemic Blues in Black and the insanely infectious Jingy Bingy Blues. The band’s rendition of Knocking on Heaven’s Door featuring Ashen of Silence of Loud and Suresh of Stigmata on guest vocals, had the entire venue singing or shouting along and celebrating in the beauty of live Rock music.

Finally, the venue was electrified with anticipation and ready for the showrunners. Stigmata took to the stage like a Tsunami sized hammer smashing down. The quartet displayed musicality of a refined vintage combining their knack to compose memorable anthems and impressive musicianship. From the thrashy grooves of Heavy is the Head that Wears the Crown and the dazzling prog metal rhythms of PuRer (Libera Nos a Malo), one of Sri Lanka’s most celebrated anthems Andura, to the emotionally charged tribute to all lost pets Alyssa, the heavy mid-tempo lament of Lucid to the technical wizardry of show closer Spiral Coma – Stigmata proved how and why they have been in the game for so long.

However, the highlights of Stigmata’s performance were when the band invited on stage vocalists from all the attending Rock and Metal bands in the audience for the band’s popular ballad Voices and the diverse metal fusion anthem Jazz Theory that had everyone going wild.

The other highlight was a new song titled Stellae which had the venue holding its breath and hearts; a lavish song full of varying styles, groove, melody and beautiful arrangements which feels like one of the band’s crowning compositional achievements.

The band has been the leading flame-bearer for Lankan originality by always evolving its sound, improving their overall live experience every step of the way. Stigmata always adapts and stays true to their musical lineage. From always engaging with its ‘Saints’ and followers on digital media, to working tirelessly to record and release the highest quality music on all formats so audiences can access it on multiple platforms, to dropping some of the most compelling and unique merchandise around – Stigmata have always done things diligently and differently in style.

Don’t miss out on the band’s next concert on Saturday the 8th October at Darley Road Pub & Restaurant. 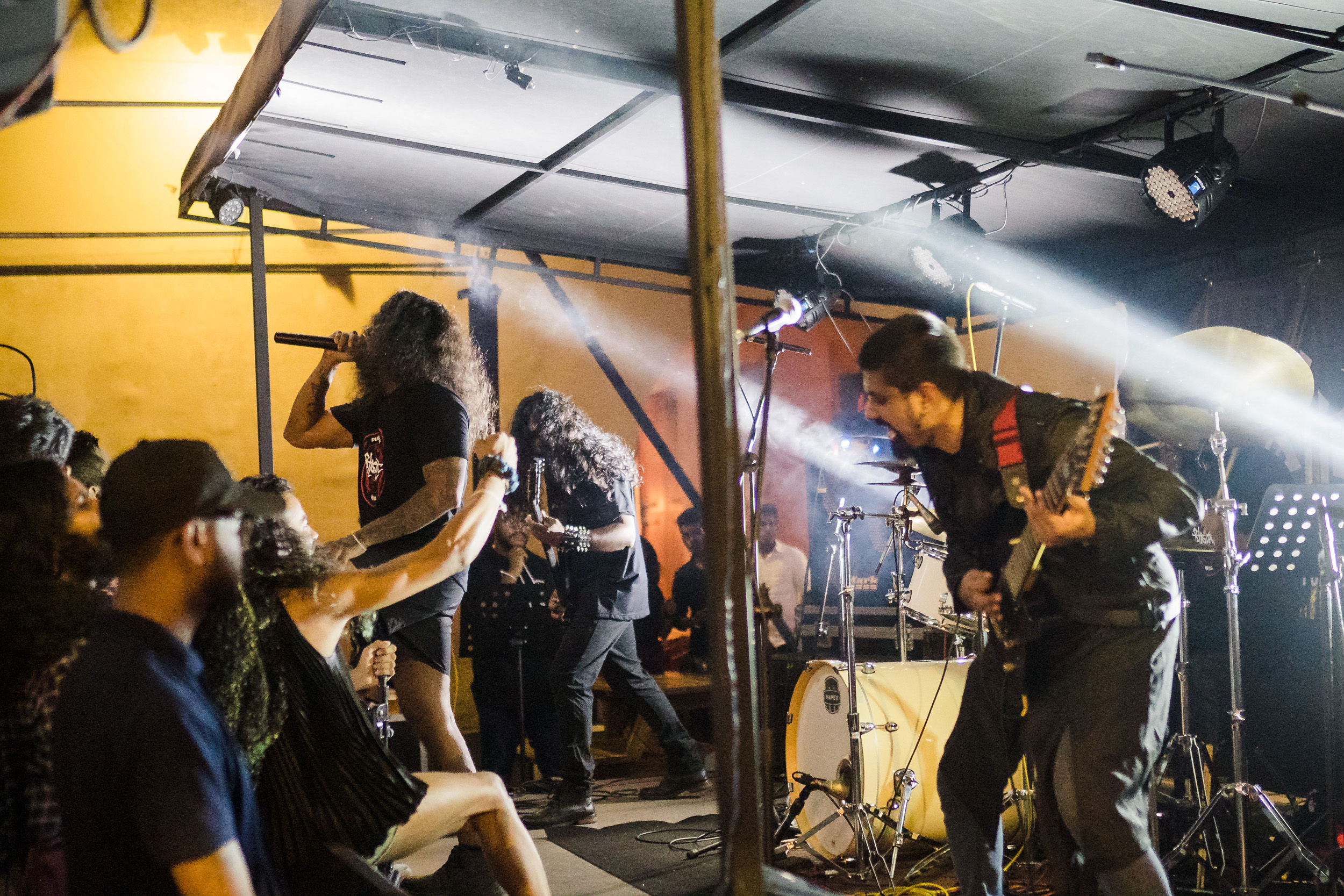