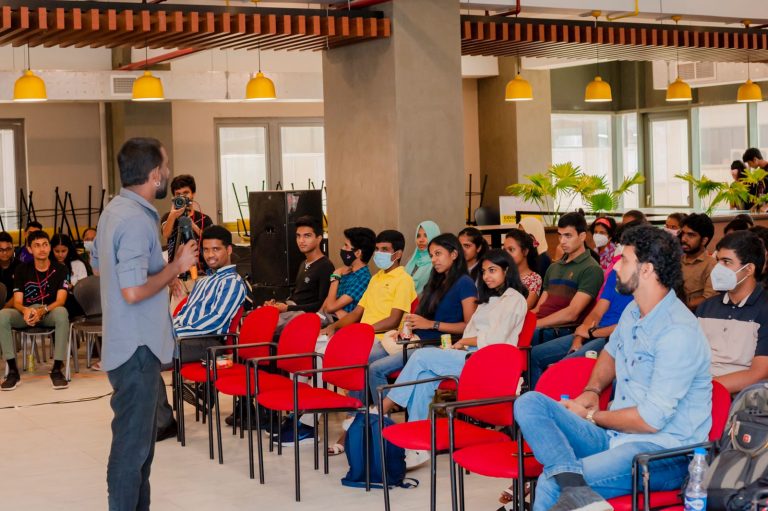 AIESEC in University of Sri Jayewardenepura was able to successfully conclude Creative Circuit 3.0, one of its flagship events revolving around the creative industry, on the 23rd of July, for the third consecutive time. The event was aimed at trying to inspire the next generation of youth with creativity and innovation by bringing down backstage heroes related to various fields into the spotlight and giving the audience the opportunity to address and interact with them..

The event kicked off virtually on the 15th of July and continued on for the next two days through Facebook and YouTube; being a resounding success with over 13000 views, and was wrapped up as a physical day the following week, with over 100 delegates in attendance.

Creative Circuit 3.0 was graced by 19 speakers across 4 continents who covered 12 fields related to the creative industry. Among the most notable speakers were Dean Wright, an Oscar Nominated Visual Effects Artist who had worked on Titanic, Narnia and The Lord of the Rings; Sean Genders, an Emmy winning Makeup Artist who had contributed to The Pirates of the Caribbean, Kong Skull Island and Star Wars, and Kym Barrett, another multi-award winning Costume Designer whose portfolio included the likes of Aquaman, The Amazing Spider Man and The Matrix.

Prakhar Agnihotri, a Visual Effects Artist who had worked on some of the biggest blockbusters in the world such as Black Panther, Avengers Infinity War, and Hobbs and Shaw, attended as a virtual guest speaker and shared his thoughts regarding the event. “It is really amazing when you have a whole event centered around creativity, connecting us with everyone, and providing access to information that I myself wished I had in my early days is a great achievement,” he expressed.

The event was viewed as extremely insightful, inspiring and a ‘job well done’ in the words of the delegates who attended, especially bringing into light the timeline in which the event was held; being a difficult time for the country amidst its economic crisis. Creative Circuit 3.0 marked another successful resilient chapter in the books of AIESEC in University of Sri Jayewardenepura as it continues on its path to achieve the vision of the AIESEC organisation which ‘Peace and fulfillment of humankind’s potential.’