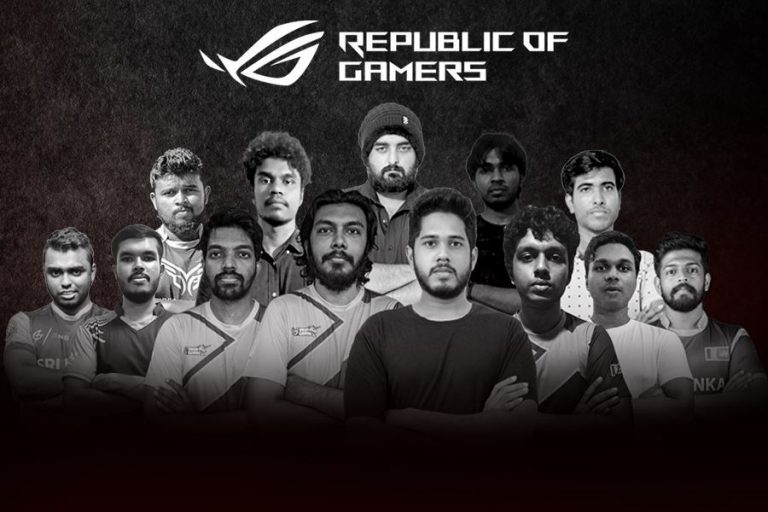 The ASUS Republic of Gamers (ROG), an ASUS sub-brand dedicated to creating the world’s best gaming hardware and software, has been unveiled as the “Official Gaming Laptop Partner” of the National Esports team of Sri Lanka.

Formed in 2006, ROG offers a complete line of innovative products known for performance and quality, including laptops, desktops, motherboards, graphics cards, monitors, audio equipment, routers, and peripherals. ROG participates in and sponsors major international gaming events. ROG gear has been used to set hundreds of overclocking records and it continues to be the preferred choice of gamers and enthusiasts around the world.

Sharing his thoughts, Leon Yu – Regional Director, System Business Group, Asus India and South Asia stated, “We’re thrilled and proud to support the Sri Lankan National Esports team so that they have the best chance of helping Sri Lanka produce future champions in the growing arena of Esports. Our design gaming technology is widely known to be world-class and perform at the absolute cutting-edge. We’re looking forward to seeing these highly talented youth take full advantage of what our most powerful hardware can do.”

In 2019, Esports was recognized as an official sport in Sri Lanka as the 70th national sport. The national Esports team represents the country at international events such as the IESF Esports World Championship, the Global Esports Games and the World Esports League. Game titles played by the various Esports teams include Counter-Strike: GO, Dota 2 (men’s and women’s), Tekken, Streetfighter, eFootball (PES), PlayerUnknown’s Battlegrounds and Brawlhalla.

Raveen Wijayatilake – President of the Sri Lanka Esports Association stated,  “We are excited to have Asus ROG onboard as the official Gaming Laptop partner for the National Esports Team. As we take a bold step into the world of international Esports with Sri Lanka’s best Esports athletes, we’re glad we have a brand like ROG supporting us.”

The Zephyrus G14 brings unprecedented power to an ultraslim 14-inch form factor. With a chassis under 20mm thin, the Zephyrus G14 has carefully customized cooling that brings out the best of its new AMD Cezanne R9-5900HS Mobile Processor built on the groundbreaking “Zen 2” core architecture combined with industry-leading 7nm process technology and up to an NVIDIA® GeForce RTX™ 3060 GPU.

The Zephyrus Duo 15 SE is a special edition of its dual-screen gaming laptop that combines an upgraded 15.6” main display with the critically acclaimed ROG ScreenPad Plus, which provides touchscreen controls on a 14.1” secondary display that enhances everything from gaming and streaming to content creation and multitasking. The Zephyrus Duo 15 SE also incorporates up to a next-generation AMD Ryzen™ 9 5900HX Mobile Processor and an NVIDIA GeForce RTX™ 3080 GPU. Its innovative AAS Plus cooling system features redesigned fans that help dissipate up to 165W of combined processor power.

The Strix Scar 15 is equipped anything with up to the latest AMD Ryzen™ 9 5900HX CPU and cutting-edge 7nm fabrication technology. Everything from Esports to AAA gaming runs fast and fluid, powered by cutting-edge GPUs up to a GeForce® RTX 3080. Built on Ampere, NVIDIA’s 2nd gen RTX architecture, these GPUs combine new streaming multiprocessors with 2nd Gen RT cores and 3rd Gen Tensor cores to enable the most realistic ray-traced graphics and advanced AI features.

The ROG Flow X13 is the first 2-in-1 convertible ROG gaming laptop, and the ROG XG Mobile, an innovative ultraportable external GPU that augments the Flow X13’s gaming performance and connectivity. The Flow X13 delivers powerful hardware in an ultraslim 13-inch body with up to an 8-core AMD Ryzen™ 9 5980HS CPU and dedicated GeForce® GTX 1650 GPU. A 360° hinge maximizes touchscreen viewing and interaction, quickly flipping from laptop mode into positions for gaming, drawing, and presenting.